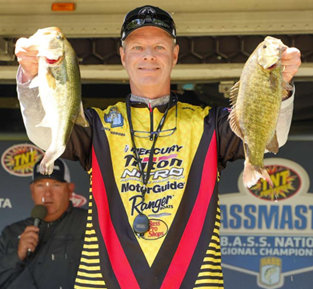 Congratulations to Rick Svoboda and Mark Pryal who will represent Maryland in the National Championship on the Ouachita River in Monroe Louisiana on November 3 – 5, 2021.

Two days of practice found two primary patterns, rock piles in the main lake 15 to 35 feet of water, the typical summer location for most smallies, and Presque Isle Bay weedbeds for late post spawn smallies and their largemouth cousins.   As expected, the heavier sacks were the brown fish in the 4 to 6 lb. range.  However, a few largemouth in the 4 lb. class made it to the scales.    The heavy 15-25 mph winds were from the south and southeast allowing the leeward side of the main lake fishable but the Bay more difficult.

Registration was held at the Bel-Air Hotel.   After team pictures, the gift bag of odd stuff (but it did include a spy bait!), generic buffet dinner, and a brief team meeting our guys headed back to prep gear and turn in early with visons of holding up a brace of 6’s on the stage in front of cheering thousands….or maybe hundreds….a few dozen…

Day 1 saw Bret Winegardner and Rick Svoboda bring in double digit 4 fish limits to the scales for our boaters and the non-boater 3 fish bags over 8 lbs. for Joe Puller and Jim Kline.   It was a nice birthday present for Jim who turned 39 again.  He much appreciated BASS adjusting their Nation schedule to make this date.

The main lake had ocean like swells that made fishing and keeping your balance a challenge.   One of our guys got seasick while tying the FG leader knot.  A lot of light bags came to the scales from all states.   One of our Marylanders weighed in the smallest fish of Day 1 to the admiring cheers of the crowd including the New Jersey kazoo blowers.   I won’t mention Norm’s name.  Big bag of the day went to Keith Poulin of Maine with 4 smallies dragging down the scale at 18 pounds even.   A few other guys found the main lake hot spots.

Day 2 included a personal best smallie for Mark Pryal at over 5 lbs.  His prior best was 3-11 so he just skipped the 4’s and when for the 5.   His 3 fish non-boater bag of 10-10 was almost matched by Kevin Willingham’s impressive 10-0.   When the dust settled, Rick Svoboda and Mark Pryal made the cut for the final day and New York winning the state title and $6700 cash prize.

The Final Day with the reduced field of 28 boats saw white caps in the bay that mostly shut down the grass bite.   The growing swells in the main lake didn’t stop the top Maine contenders from bringing in impressive 4 fish sacks of 19-1 and 18-2.   It’s good to have hot GPS points, a spot lock trolling motor, and a cast iron stomach.  Overall, our winners, Rick and Mark will go the Nationals on an even footing with all the other contenders from the other states with a few odd countries thrown in.   Top six Nation Division champions go to the Classic.  Good luck guys!  May the Fish be with you and happy birthday Jim. May you have many more Nation Regionals.