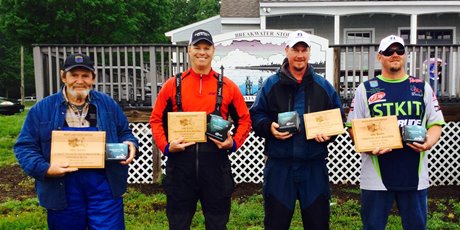 Two days of wet and chilly weather are what the 2016 MR Bass contendors had to deal with as this years competition was completed on May 21-22. Sponsored by Dick Brown and Nationwide Insurance and hosted by the Central Region this years event was held out of Virgina’s Leesylvania State Park. Two boaters and two non-boaters now hold the first four positions on the MBN 2017 State Team.

Interesting to note that the four top finishers represent two clubs. I have to believe that these were partners that came down, practiced hard together, exchanged information and capitalized on their experience without stepping on each others toes. Way to go gentleman.

Dick Brown and Nationwide provided Ardent reels to our four top finishers.
Our lunker winner was Mark Pryal with Northern Neck Fishing Team. With a first day catch at 4 pounds and .49 ounces that held up throughout the event.

Central handed out MBN engraved compact flashlight/lantern combos that were a big hit and useful to boot. Kudos to Jon’s wife for coming up with the idea.