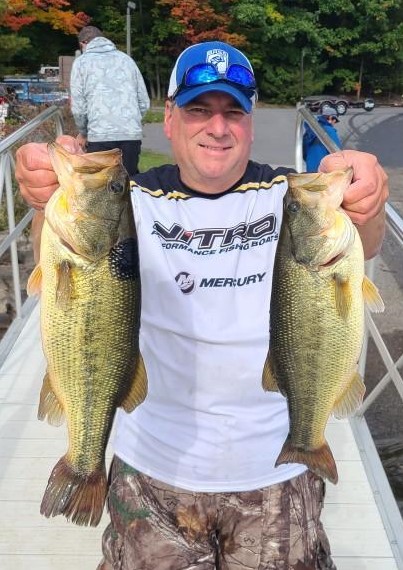 The 4th and final SQT Trail event took place on Saturday, October 8th at Deep Creek Lake. This final event would decide the top six boaters and top six riders who will qualify for the State Team. This was a typical Deep Creek event as far as the weather. The air temp in the morning was in the upper 30’s, wind blowing and the wind would continue throughout the event.

Ed and John finished first and second on the boater side of the event and both had an epic day of fishing for Deep Creek. Ed had over 18 pounds and John had over 17 pounds which is fantastic for an event on Deep Creek any time of the year. Ed and John both provided great detail about their day on the water. I will summarize their stories the best that I can.

Ed started his day in McHenry to fish some docks but it was too early so he decided to move out on some points. The points had wind on them with a grass edge that started in about 3 feet of water on the inside edge and sand and gravel to the shore. The deal was Ed was using a Megabass ITO 110 jerk bait on 14 lb. flourocarbon line with a Daiwa fast tip 7′ rod and Shimano reel. The first fish came within minutes and was about 4 pounds but, no more keepers there. Ed went to Stump Point thinking it would be good because he had caught some nice fish here 2 weeks  prior. However, when he got there it did not seem to be much bait around so he left. He went back to dock fishing but it did not produce any size and Ed knew from experience that it would take largemouth to finish high in the standings. By this time it’s 11:00 and Ed only had one nice fish. Ed figured by now that the spot he had been waiting to go to was probably ready. The wind was blowing WNW sustained at about 12 mph with higher gusts when he got there and it made it hard to fish. He started fishing further down from his spot where he had some protection and about that time all hell broke loose. The first cast produced 2 – 3 pounders on the same jerk bait at the same time with 3 more following them. Ed was only able to get one of the fish in the boat. The wind blew him off his spot so he fired up his motor and moved back into position. Ed was able to catch 2 more before the school cooled down. He went to another area for about 20 minutes with now results. Ed went back to the schooling fish and on his first cast he caught a 7.35 which ended up being the big fish in the tournament. He ended up catching more fish after that but none would help his overall weight. Ed was 14 points from the sixth place boater going into this tournament but, by finishing first and some others slipping up on this day, Ed’s fantastic day put him on the State Team. Ed wanted to thank his co-angler Mike for dealing with the wind and never complaining and doing a great job of netting fish in rough water.

John Jeddry ended up in second place on the boater side with another great bag at 17.06 pounds with a 6.17 pound kicker. John told me that if one place was his nemesis, it is Deep Creek. For the first time, John’s club scheduled a club event at Deep Creek 2 weeks prior to the tournament. He said he had a lot of bites in the club tournament but, he could only hook 2 pound class smallmouth. Being 5 points behind the leader in points and a bunch of guys on your heels puts pressure on you for a State Team spot in the Trail Event he said.

The rest of the story according to John is a follows:

My practice started at 10 on Thursday. I fished until 4:30 without a keeper fish. Things were starting to look like a repeat of the Team Outcast club event 2 weeks earlier. I decided to take a break to eat and rethink my tackle selection. I parked the boat in a sunny spot 10′ form shore. I ate and worked on some tackle for about 20 minutes. When I stood up, I saw a bass sunning itself right next to my boat. I took some video the eventually caught this 3 plus fish on a skinny senko. I then went to the next area. i had make a change to a crawfish imitation bait that I bought 2 years earlier. I soon discovered that the little fish, rock bass, yellow perch or whatever fish were stealing the end of my baits and were not attacking this new setup. During the rest of that evening and Friday I found out that I would go to an area and get bit by bass almost right away and sometimes see them before the tension on the line would make them spit the bait. I only put the hook on 3 fish Friday, a 2, a 3 and a 4 pound fish and all from different areas.

My game plan was to fish about 7 to 10 areas at both ends of the lake. In the morning I found out that there were 2 other tourneys at the ramp. Starting out as boat #23 and going to a community hole area, I arrived to my first area with a few boats already in the area. I had to go to another area and found the water temp dropped 2 plus degrees overnight. I told my rider we needed the sun to get the fish into an active mode. The sun never really came out. It took about 1 1/2 hours before I got a 13″ fish.

Quite a few boats came and left this area during the morning. I took notice which docks were being pounded and I knew at some point I would be fishing behind other boats. One hour later I got another 13″ fish followed by a 3 pound fish. Another 30 minutes later another 3 pound fish. I decided to stay longer than I had planned. A little later I noticed my line was moving slowly sideways and set the hook. All we saw at first was a big black spot shaking in the water. I heard Mike yell out “I’m getting the net and you didn’t ask for it”. I worked the fish in the figure 8 and when it was tired in the net she goes. This was the 6.17 pound fish and the only fish that was netted that day. I worked that first area until 12 or so and probably fished 80 to 90% of the docks in there. I went for a short ride to another area and got fish #6 and culled up about 2 ounces. Left there and went for a 3 mile ride and got a fish off the 2nd dock but, it did not help. Decided to go back t the 1st area after 2:00 and got one more key bite. This fish was my second biggest fish and I culled out a 13″ fish.

I ended up only fishing 4 areas because I decided to spend time fishing and not spending lots of time running around to fish used water or find boats from the other tournaments going on. I never made it to those fish I found on Friday. I believe I fished around 80 – 100 plus docks at least to get 8 bites.

As I feared, I still had a 14 1/4″ fish in the box and had a gut feeling this one was going to cost me the win. I kept telling my rider, “if I’m catching them then I know someone else is”. It’s funny how things work out because Ed and I talked on the water 2 weeks earlier and he was on them good. When I returned to the ramp I parked next to Ed, who was at the scales. I waited to hear form Ed how his day went. Great job Ed.

John’s second place finish would land him in 1st place overall in the standings for the SQT Trail for the year. Outstanding year John. Congrats.