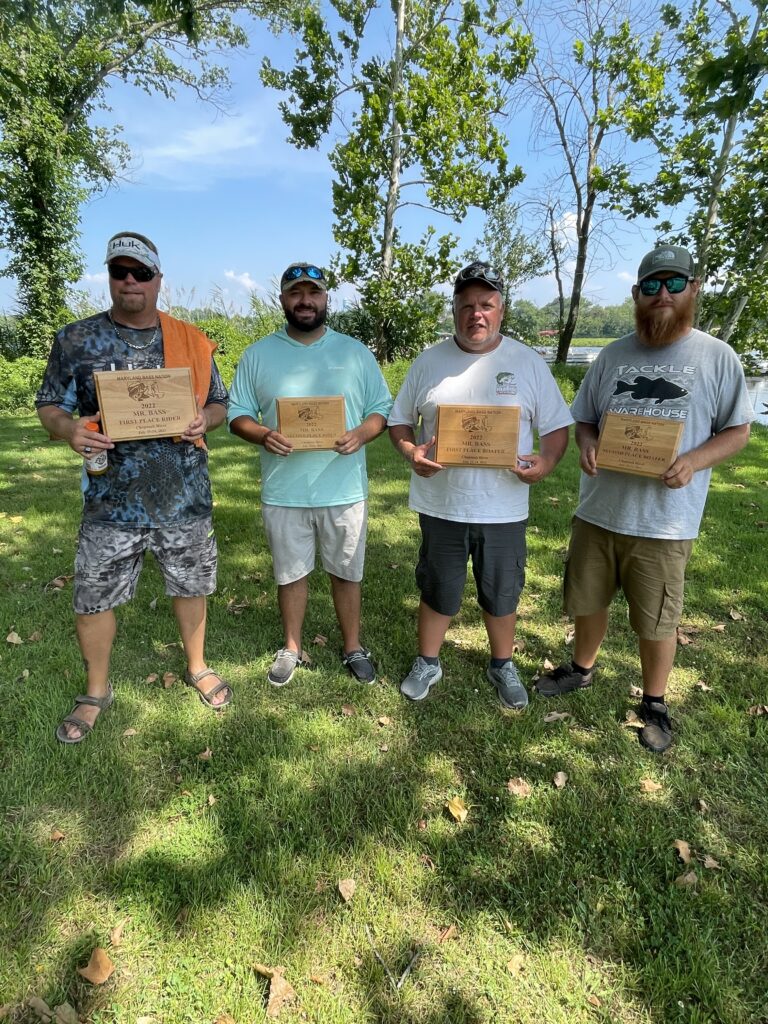 The Mr. Bass event was held on the Choptank River on August 23rd and 24th at the Choptank River Yacht Club. This weekend was the hottest two days of this year with temps in the upper 90’s and heat indexes well over 100 degrees. Weights were down for this event surely because of the intense heat and the high pressure system. However, the top 2 boaters and top 2 riders caught enough weight to secure themselves a spot on the 2022 State Team.

Brett Wingardner won the boater side with a total of 12.87 pounds for his two day total weight. Brett struggled the first day catching less than 5 pounds. The second day Brett decided to run down river away from the majority of the boats in the field and ended up having his area all to himself. Brett said that he just slowed way down with his presentations and caught all his fish throwing a small 4″ finesse worm. He ended up almost doubling his weight on the second day of the event.

Tyler Hawthorne was Brett’s rider and also made the State Team finishing 2nd on the rider side with 10.43 pounds of fish for 2 days. Tyler’s summary of his days with Brett was much the same because Tyler also struggled the first day. He said Brett was a great boater and he learned a lot. Tyler said tough days of fishing really test you as an angler. The first day Tyler caught his fish on a soft plastic creature bait, senko and a 4″ finesse worm. Day 2 everything he caught came on the 4″ finesse worm just like Brett’s fish.

Justin Bronson took second place on the boater side with a total of 11.03 pounds for his 2 day limit. Unfortunately, I was not able to get any information from Justin about his days on the water. I do know the first day Justin spun his prop and his trolling motor stopped working. Somehow he was able to finish out the day and he had everything fixed for the second day of competition and still managed to catch enough fish to finish second.

Saving the best for last in this article, Greg Ledwell caught the most weight in the 2 day event even surpassing the boater side with his total weight at 13.55 pounds. Day 1 Greg said he and his boater started shallow and wasn’t getting any bites. He started throwing out in the middle of the creek and hooked a keeper that came off. On the next spot he noticed they were in deep water really close to the bank with a lot of knotty wood. Greg immediately picked up his flipping stick with a straight shank flipping hook and 1/4 oz tungsten weight pegged. He said that was the key in not getting hung up on the roots and knots in fallen trees and stumps. He would flip in the tightest brush and trees he could find. Greg said the cover provided a really good current break for the fish and there were bait balls everywhere around these areas. Tide was critical because the fish ate during the tail end of the outgoing tide. Greg thought that there were better fish in these areas as opposed to the shallow water areas. He was fishing a Grande bass rattler and dipping the tail in dye. One other spot that produced was a creek mouth on the main river with a ton of bait moving in and out. He was able to get a keeper each day from this area as well on a 1/8 oz Micro jig tipped with a Ned rig craw. Something to note, Greg’s boater left after the first day and he fished with another boater the second day. Greg’s boater the second day took him to the spot Greg wanted to fish after failing to catch fish in the first spot the boater went too.

It was good to see the turnout that we had for this event. I would like to give a shout out to those who worked this tournament and also a special thanks to those anglers who stepped up and helped the second day after weighing there fish. It is great to see guys step up which is what we really need now. There were several guys who also stayed and helped Roger put everything away in the trailer. Thanks for everyone’s supp