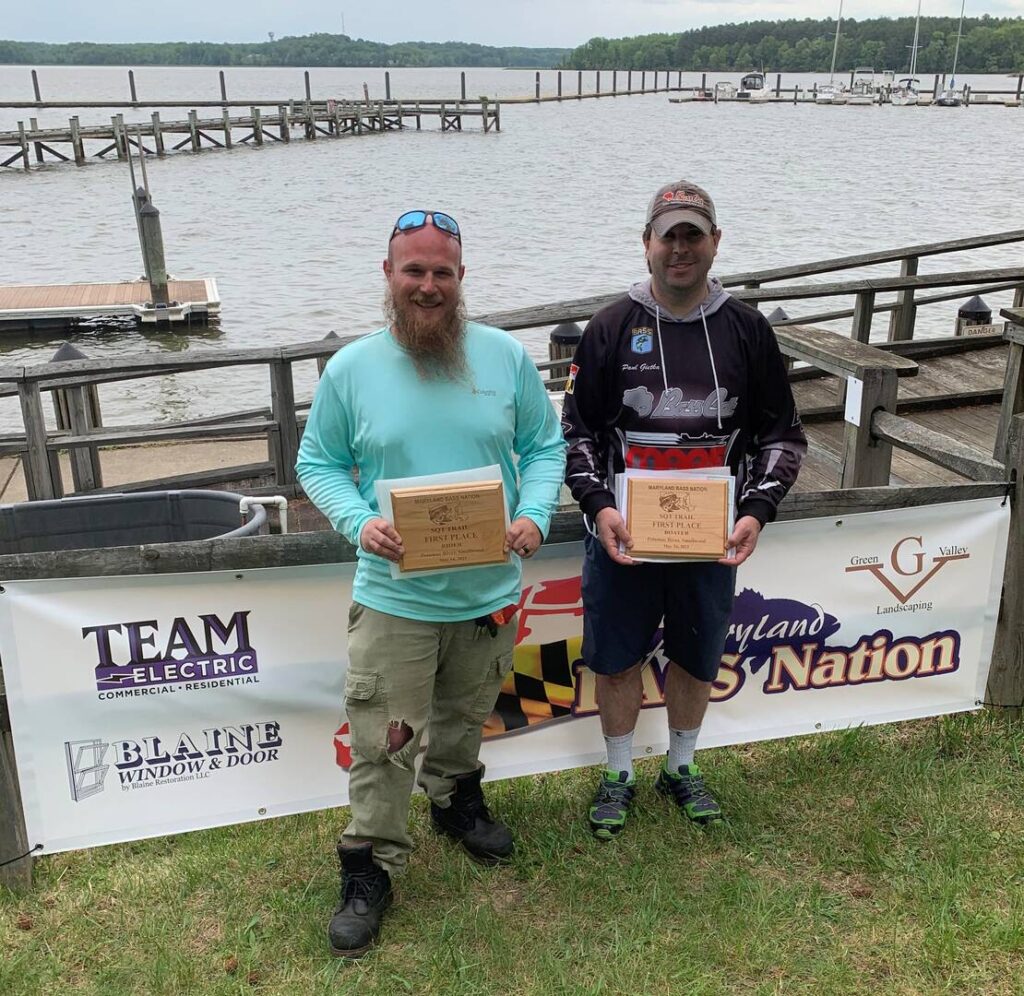 The second SQT Trail tournament took place on the Potomac River on Sunday, May 16th out of Smallwood Park. The top two boaters Paul Gietka and Kyle Slomba provided a summary of their day on the water.

Paul Gietka won the boater side with 18.10 lbs., and he also won the big fish honors with a 5.16lb kicker. Paul said he had not fished on the Potomac in a couple of years due to the pandemic. He went out for ½ day of practices on the Wednesday before the tournament. Paul was able to find some fish and confirmed that the fish were in all phases of spawn. His tournament day went very well with his winning bag in the live-well in the first 20 minutes of the tournament. He said he culled up quite a few times throughout the day and threw back a lot of keepers with his smallest fish being over 3lbs. He concentrated in shallow spatterdock and wood with chatterbaits, creature baits and senkos. Most of Paul’s fish came on the chatterbait but, he did have senko and creature bait fish in the five that he weighed in. Paul wanted to thank many people for their support, his wife and family, his partner for the day, Kevin Willingham for a fun day on the water, the volunteers who helped run the tournament and the local sponsors of the MBN for their support.

Kyle Slomba finished 2nd on the boater side with 15.60 lbs. of fish for his best five. Kyle said he started out fishing grass with a lot of other boats around him. His rider caught a couple small fish but could not buy a keeper bite. After talking with several boaters around him, he found out that guys had small limits but nothing substantial. Kyle decided to run to another community spot down river hoping to at least catch a small limit off the rocks. When Kyle pulled into the spot, they were the only boat there. Within 10 minutes Kyle had 2 good keepers. He and his rider finished their day there and they both were able to fill their limits. Kyle said he was throwing a light Texas rigged bait and caught all his fish on it. Both Kyle and his rider ended up finishing 2nd place in their divisions. What started out to be a rough day, turned out to be a good one.

Tim McGlenn finished 3rd on the boater side with 15.12 lbs.

Justin Bronson had an epic day winning the boater side with a 17.72 lb. bag which was 7lbs. more than the 2nd place finisher. First thing in the morning knowing the low water would improve the bite upriver, Justin ran all the way up as far as he could. Within the first 15 minutes he caught his kicker fish, the 6.18 lb. fish which would be the biggest fish caught that day. He said the fish was deep in a downed tree and ate a Texas rigged craw with a 3/8 oz. weight. Justin knew that if he could fill out his limit with decent keepers that he would be in contention for the win. From there Justin just kept on fishing with short idles between his key lay down areas. He said he caught fish on a variety of lures from poppers, spinnerbaits, crankbaits, shakey head and the flipping bait. With about an hour and a half left to go he ran all the way back down near the ramp and spent the last of the day fishing the train bridge just above town. The bridge is where he caught his second-best fish of the day which was around 4 lbs. The fish ate the same flipping bait the other kicker fish ate. Overall, he said it was one of the best days ever on the Choptank River. Justin thinks that the river is making a big comeback. I can understand why he would make the statement.

Andrew Sams to second place on the boaster side with 10.70 lbs. for his best five. He said he started the day running up the river above Denton covering waster throwing a buzzbait and various plastics on the falling tide both on lay downs and pads. Andrew and his rider Craig caught their limits within the first two hours of the day. They finished up the Choptank until about 9 AM switching between flipping plastics and throwing topwater baits. Once the tide turned around, he ran up to Tuckahoe Creek to fish a few areas where he has done well on an incoming tide and he and Craig both culled several times up there. The bite did slow in the afternoon on high water but, we still did manage to get bit most of the day.

Paul Gietka again finished in the top 3 by taking 3rd place with 9.94 lbs. Unfortunately, I was unable to get any comments from Paul about his day.

On the rider side, Craig Winegardner took first place out of the back of Andrew Sams boat with 6.26 lbs. for his best 3 with big fish honors with a 3.20 lb. fish. Craig said this was his third time over the years being paired with Andrew and he has always done well fishing with Andrew. After reading about Andrew’s day, it pretty much sums up the day that he and Craig had. Craig said it was one of the best days of fishing that he has ever had. He said Andrew put him on them.

Richard Slomba finished in 2nd place on the rider side with 5.70 lbs. and Matt Vanleen took 3rd place with 5.19 lbs.