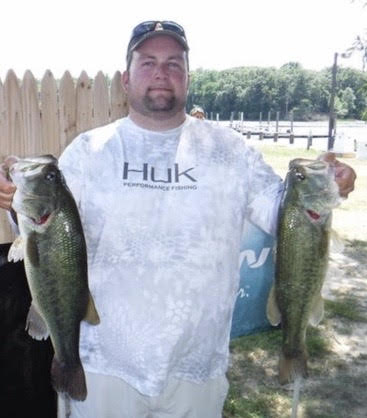 May 31st at Smallwood State Park the first SQT Trail Tournament for the 2020 season finally kicked off after tournaments had been shut down due to the Covid-19 Pandemic.

Mike Roselle won the Boater Division with 15.44 pounds. Mike said he stayed in one creek that was loaded with grass the entire day. He caught a total of 15 fish throughout the day fishing with a senko all day long. Late in the day he said he caught a 4 lb. fish which helped to boost his total weight. Mike started with MBN back in the early 2000’s when he fished through the youth program. Glad to have you back fishing with us Mike and congrats on winning your first tournament fishing in our event.

Paul Reter took second place with a total weight of 15.17 pounds. Paul said he caught a couple fish early in the day cranking an area with a hard bottom. The rest of Paul’s fish were caught on a jig flipping docks in the back of a creek. Paul said he caught the majority of his fish flipping and actually culled 4 or 5 times during the tournament.

Brian Trieschman finished third with 14.33 pounds. Brian told me he flipped wood most of the day with a black and blue chigger craw to fill out his limit. He would not give up any more information about his day on the water. Brian is definitely one of the veterans of MBN and has been on the State Team practically every year since he started fishing with us. I guess you could say that Brian is one of the old guys. Sorry Brian, I know I am going to get backlash for that one. On a serious note though, Brian has been fishing well consistently since being a part of MBN.

Mark Pryal won the Rider Division with a total weight of 9.74 pounds for his best 3 fish limit. Mark is also somewhat of a veteran in our Nation and has been on the State Team several times in the last few years. Mark said he and his boater fished scattered grass all day. He started out throwing a swim jig because that is how his boater was catching them. However, by 10:00 Mark said he had not boated a keeper. He decided to pick up a spinning rod and tied on a Texas rigged brush hog and ended up catching his limit and more throughout the rest of the day. He said he lost a 4 pounder during the tournament and he still ended up winning the rider side.

Steven Davis finished in second place on the rider side with 8.57 pounds. I did not have to contact Steven for any information because he was my rider and he totally kicked my butt out of the back of my boat. That’s on me for not catching the fish that day. Seriously though, I was happy to see Steven catch fish throughout the day. It did not seem to matter what Steven tied on and he proceeded to catch fish that day. Steven actually had a limit by 7:00 in the morning and continued to catch fish and culled several times during the day. Happy for you Steven and on the bright side, I guess I was in the right place because he caught many fish.

William Ruppart finished in third place with a weight of 8.31 pounds. Sorry for not having any information about William’s day but, I could not reach William by phone after several attempts.

I decided last year that I would take it upon myself to gather information after every MBN tournament and put together an article to post on our website. Since the gathering of people is not an option at the present time, I will contact winners after the tournaments to get information to put something together. I am in the process of getting an article together for the Mr. Bass tournament that has already been completed and we should have pictures from that event. I would like to thank Cindy, Roger and Cindy’s staff for the help in running the tournament which went very smoothly. I would also like to thank the guys that helped at the end of the tournament after they weighed their fish. I know Dave Kashuba and Don Eney were two of those guys that helped out and I am sorry if I missed anyone else who may have pitched in after fishing. Helping Cindy after you have fished all day is something that I would like to see at all of our events. Guys, I cannot thank you enough for helping and I know that it is very much appreciated. Good luck to everyone in the coming events.