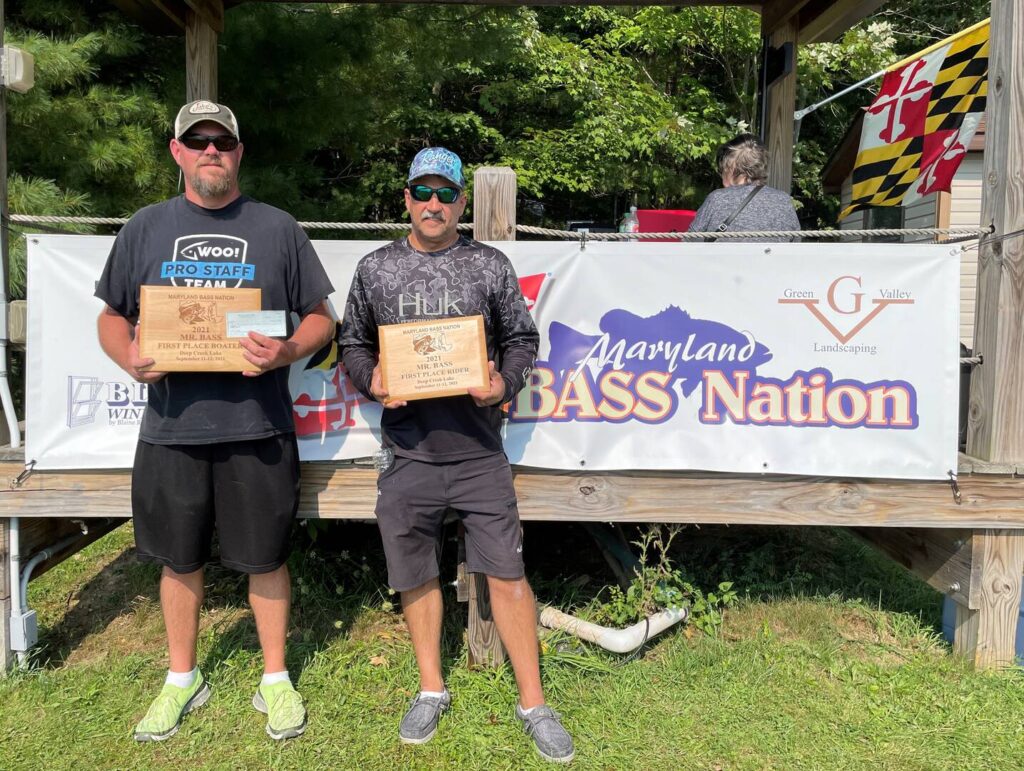 Charlie Russler had a two-day total of 22.44 lbs. of fish to finish first on the boater side of the event. He said he made up his mind the first thing in the morning before launching the first day to try a piece of wood that he had not fished in about 13 years to try to get a good largemouth. Charlie’s decision paid off with a 5.43 lb. largemouth. The largemouth ate a jig thrown on his Russler Rods custom 7’ 6” heavy rod. He spent the rest of the day skipping River Rock tubes with 1/8 oz custom tube heads from Stkit on his Russler Rods custom 7’ medium heavy spinning rod on every dock that he has ever caught a good fish on.

The second day of the event he revisited that piece of wood and only caught one short smallmouth on a swim jig. Charlie spent the rest of the day once again skipping the tube on every dock he has caught good fish on in the past.

Garrett Hoffman took second place on the boater side with a total of 18.83 lbs. of fish for his efforts. Garrett said that he is very appreciative to have been able to not only be a part of fishing the Mr. Bass event but also placing a spot on the State Team. He has been fishing Deep Creek his entire life and joined Garrett Bassers last year and was proud to be able to finish his first (angler of the year) with them. He said this year has been an extremely busy year for him and he did not have much time out on the water. It was a true blessing to have been lucky enough to get to fish the tournament on his home lake. Saturday his trolling motor batteries died before noon but he came off the water with a great bag of almost 14 lbs. and leading the tournament with almost a 2 lb. lead to start the second day of the event. Sunday got off to a rough start by losing three great fish the first half hour which he knew would probably haunt him. There was a lot of wind Sunday as well but, he was lucky enough to still manage to place second overall add secure a spot on the State Team. Garrett was thankful for all his family and friends for their support and this opportunity.

Tom Todd finished a very close third with 18.35 lbs. for his 2-day total. However, Tom did take home big fish honors with a fish weighing 5.62 lbs.

Richard Carr won the rider side with 10.91 lbs. of fish. Unfortunately, I was not able to get any comments from Richard about his 2 days on the water. Richard was Charlie Russler’s guaranteed rider so they of course are in the same club.

Mark Pryal finished in second place on the rider side with 10.22 lbs. for his 2-day total. Mark said every fish he caught was on a wacky rigged senko skipping docks. Saturday was his usual DCL day of catching small ones with a small keeper mixed in every now and then. Sunday ended up being his day to catch a couple decent fish. Mark said they fished the same areas on Sunday and did the same thing but the 2 keepers he weighed in were for some reason much bigger. His first keeper on Sunday was just shy of 4 lbs. and he caught it on an errant cast. Mark was trying to skip up under a dock but hit the side of the dock and the fish hit. His other fish he caught after they had fished the side of a dock very thoroughly, then going to the next dock, Mark casted parallel to the dock that they just went pass and the fish grabbed the senko he was throwing. Having 2 fish by 9 am, Mark thought getting his third fish would be easy but, it never happened. Many, many thanks to Greg Hall for keeping the boat in position for me to effectively fish the docks and try to get the 3rd fish. With the wind Sunday, keeping the boat positioned was not easy. Mark lost about a 2 ½ pounder that he saw at about 2:15 and he figured that fish would prevent him from finishing high enough to make the team. Mark had enough to make the Team and he ended up with the big fish of the event on the rider side with that 3.87 lb. fish.